This is the greatest meeting of woods and water. Mere moments from Highway One, yet seemingly worlds away, this five-acre property sits in the silence of the forested Jacks Peak.

Ushered through rusted-steel privacy gates, you drive up a lamp-lit rise to the single-level house resting on the largely level acreage. Behind a landscaped privacy berm and flanked by a solar-paneled two-car garage, the 4,554-sq. ft. house is an elegant yet unfussy mid-century marvel.

Built in 1975 at the end of its architectural era, the property was again purchased in 2014 and underwent a year of renovations, bringing it into the era of modernist technical innovation.

Through a front door of horizontal glass panes within dark wood, which complements the garage door, the entry is a Durell Stone-like tracery of carved limestone. Yet all is eclipsed by the front-to-back exposure to a wide view of the magnificent Monterey Bay.

Across a finished deck, which steps down to a manicured lawn framed in foliage that hides fencing at the edge of the lot, the grand view is the whole arc of the bay. From white water rushing the shore, to the coastal reaches of Santa Cruz and beyond, the sea, reflecting the mood of the sky, surges silently in the distance.

Returning your gaze to the room, three steps lead through a steel railing reinforced by steel cables, into the expansive living room unfolding beneath a pitched pine ceiling, supported by a pair of trestles. The fireplace is faced in a feature wall of narrow-shingled limestone, in contrast to the wide-plank, dark hardwood, radiant-heated floors, which run throughout the house.

The open kitchen is designed with a marriage of technical efficiency and subtlety. Presented in a complement of soft grays and white, as is the rest of the house, the kitchen features smooth soapstone waterfall countertops and stainless appliances, including a six-burner Thermador stove over convection and conventional ovens, and a Sub-Zero refrigerator. Dark-glass cabinetry lifts open with a touch.

An eat-in area opens, through a pair of glass doors, to an enclosed patio framed in foliage.

Clear-glass pendants hover above a bar-height counter between the kitchen and dining room, which is framed by windows to the bay.

A long hallway runs the length of the house, leading to bedrooms and baths in both directions. Past the kitchen, a barn door slides to reveal a mud room, followed by a full bath, fitted with a Calcutta marble counter with undermount frosted-glass sink, heated towel rack, and glassed-in shower, similar to all four full bathrooms.

Across the hall is one of five bedrooms, with built-in shelving on one side and a direct view of the bay through wide corner windows.

In the opposite direction, the hallway passes the entry, beneath a pair of skylights, and continues through the house, collecting bedrooms and baths. A Jack-and-Jill pairing of spacious bedrooms shares a generous bathroom behind barn doors, with dual marble vanities and a glassed-in shower.

The fourth bedroom houses double glass doors behind plantation shutters, which open to the garden. Across the hall unfolds the master suite, which was designed with views in mind. Wide windows reveal the bi-level backyard, to the curve of sand edging the broad bay. At night, lights rim the coastline like a distant strand of gems. The house has no need of window coverings.

The master suite hosts a generous walk-in closet on one side, and a water closet on the other, discrete behind a door fitted with frosted-glass panels. The space opens to an expansive bath with a free-standing soaking tub before a wall of basket-weave glass tiles, and another in polished limestone tiles. Upon the vanity, a pair of frosted-glass sinks face the glassed-in Carrera marble shower.

The long hallway ends at an office, beyond which is another bedroom, bathroom, living room and small, efficient kitchen. The space could continue to serve the household or could be closed off to create guest quarters or a rental unit. A second two-car garage sits just outside.

The property could support the addition of a larger garage, a barn or a corral, or it could be left in its natural state, simply to enjoy the beauty of the landscape. 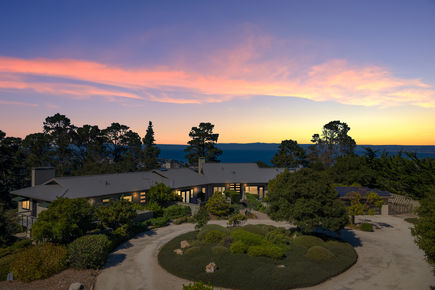 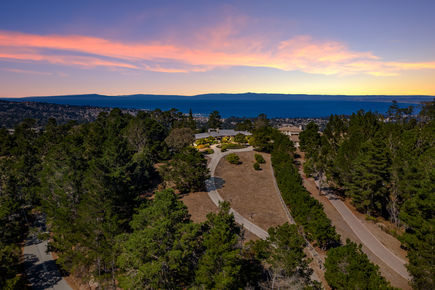 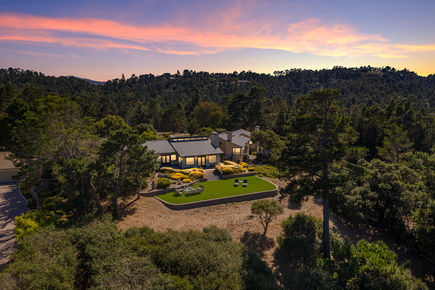 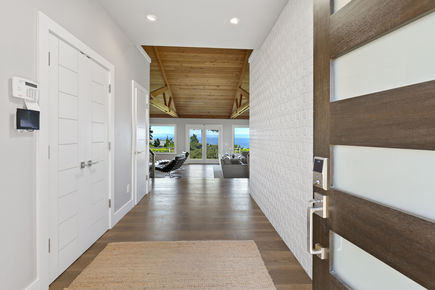 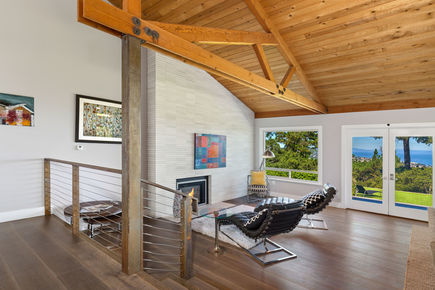 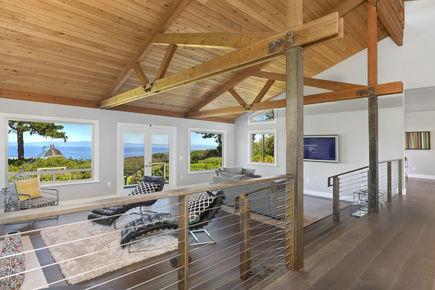 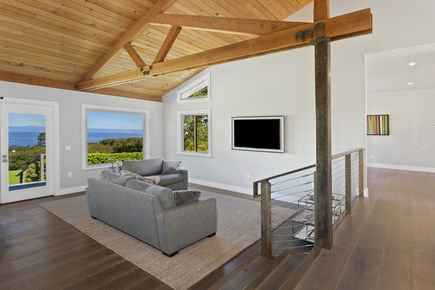 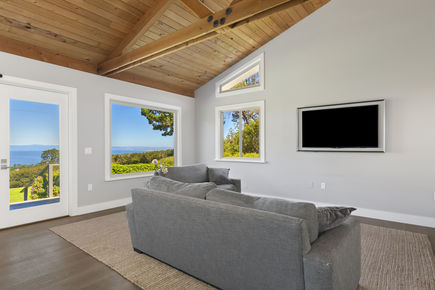 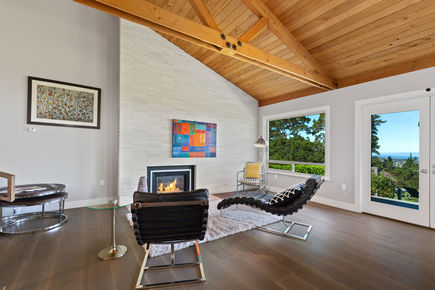 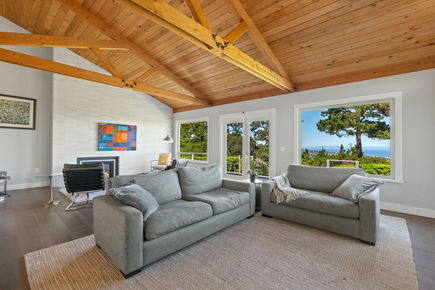 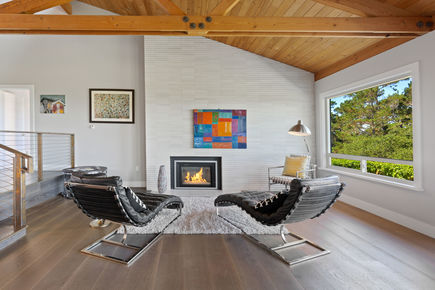 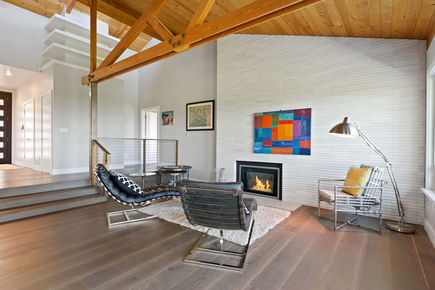 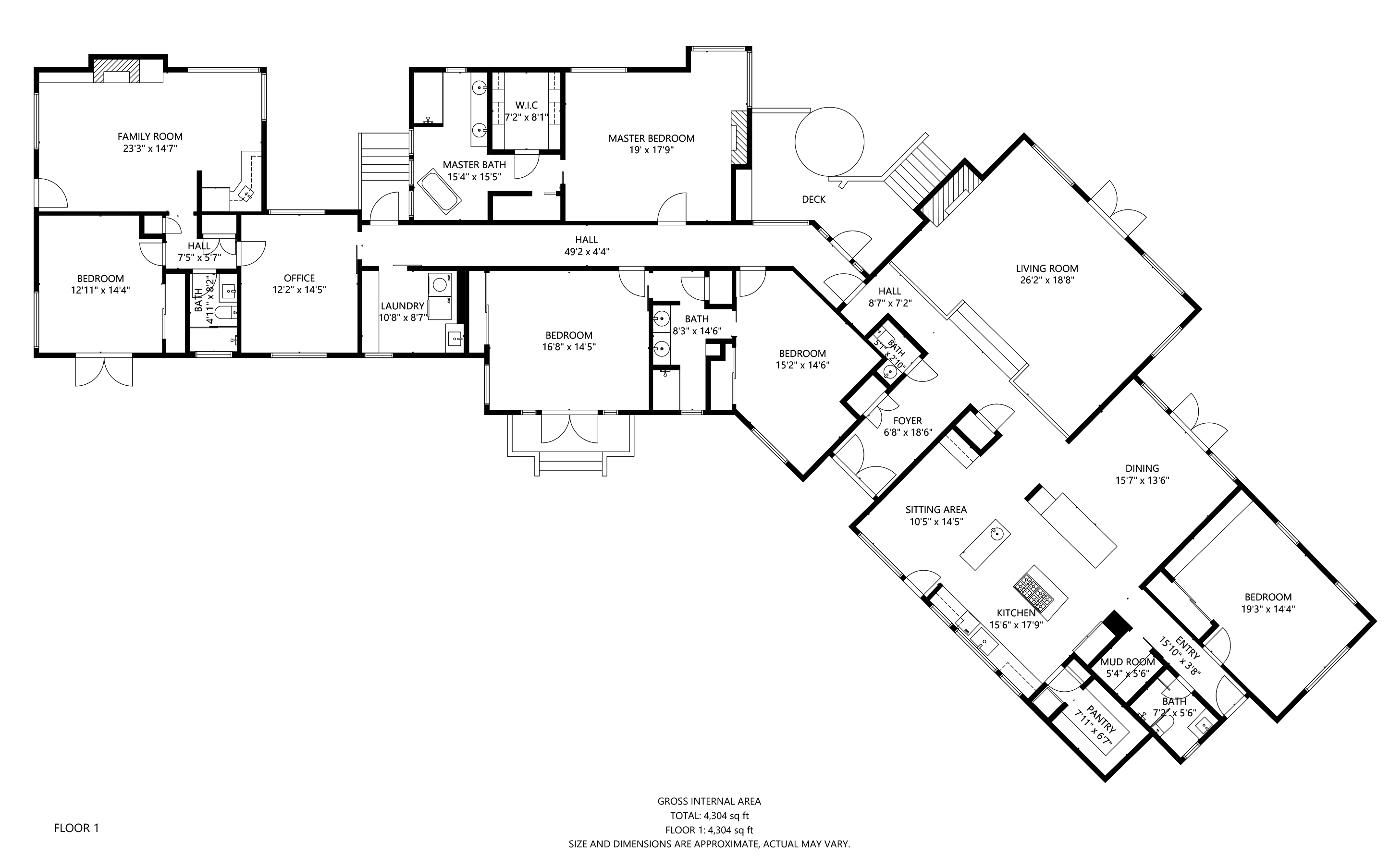 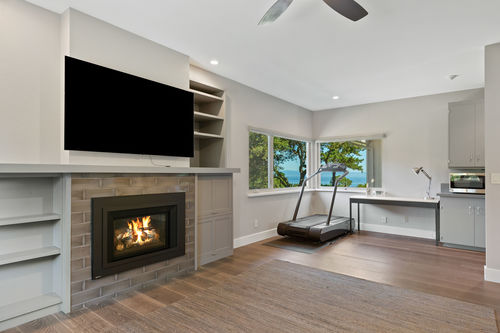 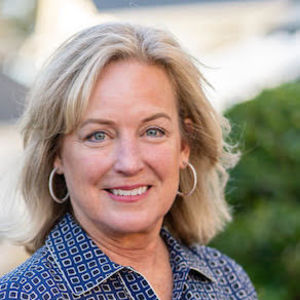